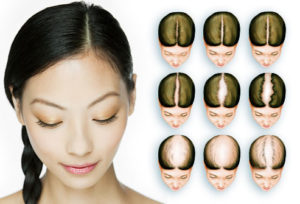 Female baldness is not an issue that get’s much attention. Male baldness is something that everyone is used to, unlike female hair loss which is almost a taboo. It is very different for a woman to lose hair. It can be very tough psychologically as hair is much more important to women than men. Men are even expected to lose their hair when they get older. In most cases women lose their hair because of cancer treatments, but some in cases it is hereditary.

With men baldness is usually caused by dihydrotestosterone, a type of male sex hormone. At first it was thought that it is the same for women, but later studies have shown that it is more likely caused by an autoimmune disorder. The shampoos, supplements and medication for hair loss are made for men and address the problem by suppressing the amount of dihydrotestosterone. That’s why those treatments do not work on women.

So is there a hair loss treatment for women? Well, there have been some women who have had help from immune system suppressing medication. The problem with that sort medication is that it has severe side-effects. As the immune system is weaker people can catch diseases they normally would not and the diseases are more severe, because the immune system can’t fight them. People on immunosuppressive medication tend to die a lot younger than people not using the drugs. That does not really sound very good, so most women tend to use a wig.

Just like with men, a healthy lifestyle can promote hair regrowth in women. Staying away from cigarettes and alcohol is actually more effective for hair growth if you are a woman. A healthy diet ensures that you receive all the essential nutrients. Massaging the scalp is also beneficial for restoring circulation in the scalp it must be done very carefully as the hair can be brittle. Sadly, at the moment there are really no effective non surgical hair restoration solutions for women.

For the moment hair transplantation is the best baldness solution for women. Although it can be quite invasive compared to medication, many women have had great results. Female hair transplantation does not in any way differ from the operation that is done for men. Hair follicles are removed from parts of the scalp that have normal hair growth.

Then the follicles are inserted to spots that have little or no hair. Multiple sessions are needed for a natural looking result. The operation can be expensive, but if the baldness is caused by a disease or a treatment for a disease it is often covered by a medical insurance. Google for female hair transplant photos and you can see how effective the operation can be.

This website uses cookies to improve your experience while you navigate through the website. Out of these, the cookies that are categorized as necessary are stored on your browser as they are essential for the working of basic functionalities of the website. We also use third-party cookies that help us analyze and understand how you use this website. These cookies will be stored in your browser only with your consent. You also have the option to opt-out of these cookies. But opting out of some of these cookies may affect your browsing experience.
Necessary Always Enabled

Any cookies that may not be particularly necessary for the website to function and is used specifically to collect user personal data via analytics, ads, other embedded contents are termed as non-necessary cookies. It is mandatory to procure user consent prior to running these cookies on your website.

SAVE & ACCEPT
Get a free quote and save!